A Post Rio +20 Letter by Andrew Mitchell of GCP

Anyone reading the newspapers might be forgiven for not noticing the significance of the Rio+20 Earth Summit. Some of the media responses reflected the general mood of disinterest and disappointment, and on the day I returned from Rio, the environment correspondent of the Financial Times could merely muster a report on traffic jams in Rio. I despair! In fact there were a number of significant outcomes, not in the main event inside the Riocentro convention centre where the politics went on, but in ‘side events’ on the margins of this vast sustainability conference. But first what about the political outcomes?

‘Roadmap to a Green Economy’ was the theme of this summit, held in Brazil on the 20th anniversary of the original UN Conference on Environment and Development. In 1992 this had given birth to three conventions on climate, biodiversity and desertification plus the World Business Council on Sustainable Development (WBCSD). Unfortunately, Rio+20 was to prove no match.

Perhaps it was because it was hobbled from the start – a vastly ambitious agenda was crammed into a hectic three day schedule, against a political background of austerity, indebtedness, and inadequate preparation. Nature was firmly back in its “we’ll get to it later” box and with the pervasive lack of ambition, a green rabbit was always unlikely to emerge out of the Conference hat.

The words ‘Green Economy’ quickly found themselves in the swamp of  “it depends on what you mean”. To rich countries fat from squandering their own natural capital, and much of everyone else’s, environmental standards now seem essential, but to many poor countries such constraints appear unfair to them, holding back their legitimate development aspirations. Even the Sustainable Development Goals struggled.  The SDGs, so cherished by many governments, especially the UK, were consigned to a Working Group aiming to define them and for the UN General Assembly to agree them by 2015. This is progress but cynics might say the SDGs, like the Millennium Development Goals, will be belatedly agreed, weakly defined and almost universally missed.  The conclusion once more is that the multi-lateral process, as a means of igniting environmental action, is about as effective as a box of matches in a downpour.  Worse, it has become a global talking shop on biodiversity and environmental security, adding to risk rather than mitigating it, by creating the illusion of advancement. 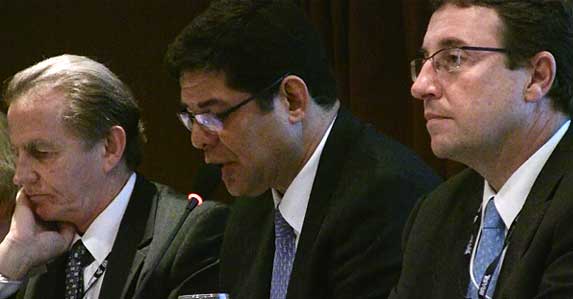 Real action in the side events:

To say there was no progress is false. On the margins of the Summit, significant agreements were made by those unwilling to stomach unreachable consensus among 132 countries divided by common distrust and wildly varying balance sheets. I will highlight several significant advances in which the GCP has had a crucial hand.

The first is accounting for nature on those self-same balance sheets. I believe conservation will remain unable to hold back the tsunami of money flowing against its interests worldwide unless governments, companies and the finance industry take account of their use of natural capital in the products and services they provide for us to use and in the tools they use to measure success.  Where natural capital is concerned, GDP is more a measure of gross destructive potential than a measure of sustainable wealth creation. Rainforests cleared to grow beef, soy or palm oil are an invisible cost paid out of national balance sheets, converted to beef burgers, chicken feed or cosmetics by companies, financed by banks, insurers and investors, and consumed by you and me. Nowhere in this supply chain does a felled tree present an invoice, the polluted atmosphere a bill, a dried river a statement.

Experience from GCP’s Forest Footprint Disclosure Project has made clear to me the alarming lack of understanding within the financial industry, and among many corporations too, of their impacts and dependencies related to natural capital. The Rio Summit offered the perfect opportunity for a wake-up call. 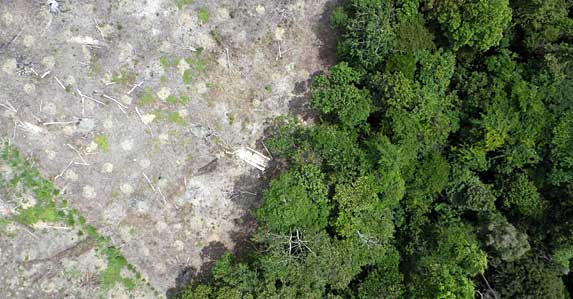 Natural capital at the mercy of accounting systems that ignore its value. Photo courtesy of Lian Pin Koh.

Natural capital – a declaration with teeth:

Joining forces with the UN Environment Programme’s Finance Initiative, and the Sustainability Study Centre (GVces) of FGV, a prominent Brazilian Business School, we designed a catalyst for this to happen – the Natural Capital Declaration (NCD). Led by Ivo Mulder, UNEP FI had been working for some time with banks, investors and the insurance industry to persuade them to take natural capital considerations into account in their future investment and lending decisions, and together we fashioned this into a Declaration containing clear commitments to embark on a process and for governments to create an enabling framework for this to happen. Launched in October 2011 in Washington, by Rio+20 no less than 39 financial institutions, including major banks, investors and insurers collectively worth US$6.4 trillion, had signed the Declaration. Meanwhile, governments had earlier joined a similar call through the World Bank’s WAVES initiative and Bob Zoellick’s challenge to have 50 governments and 50 private sector institutions committed to account for nature at Rio. The corporate sector was also being rallied through the Cambridge Programme for Sustainable Leadership’s Natural Capital Leadership Compact. 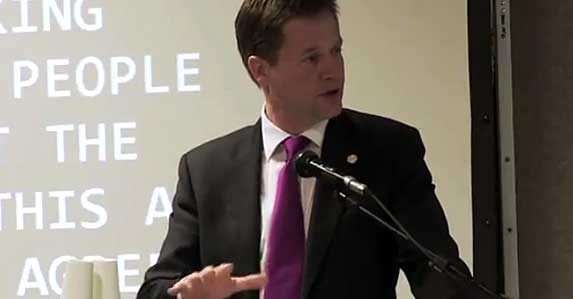 On 20th June, the Declaration was presented at the Natural Capital Dialogue event hosted by the UK’s Deputy Prime Minister Nick Clegg, and organised by GCP and the other NCD convenors, with the UK Government and the World Bank. The presidents of Gabon and Costa Rica, followed by the prime ministers of Norway and Denmark, and the EU Commissioner, along with the environment ministers of six other countries, all spoke of the importance of accounting for natural capital. Nick Clegg also announced at this event that UK would be the first country to implement mandatory reporting of carbon emissions for all firms listed on the London Stock Exchange, from the start of the next financial year. 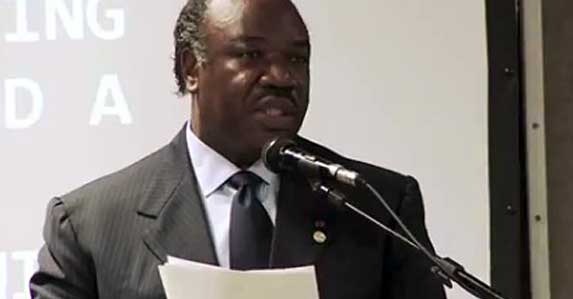 Leaders from Brazilian, Australian and French financial institutions joined the event to showcase their commitments, alongside the CEOs of Unilever, and of PUMA, the first company to publish its environmental profit and loss account (EP&L) alongside its financial accounts. Leaders from civil society including the President of WWF, the CEO of Conservation International and Pavan Sukhdev, Team Leader of the global study on The Economics of Ecosystems and Biodiversity, all lent their support. As I said in my closing remarks, nothing quite like this had ever happened before. 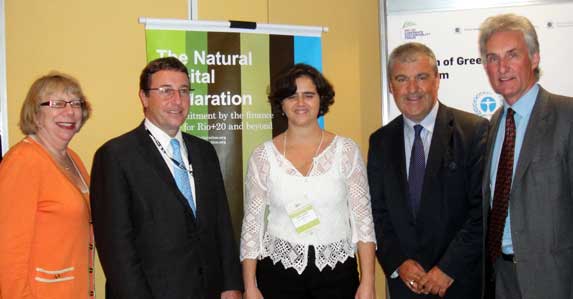 This followed two well-attended events: the NCD launch to the business community on 16th June at the UN Global Compact Meeting, at an event moderated by UNEP’s Executive Director, Achim Steiner; and, on the 18th, the launch of the NCD ‘Roadmap to Account for Nature’ in the Rio Conventions Pavilion. This roadmap charts how the process to account for nature for the financial sector could be achieved in four clear steps:

The roadmap targets 2015 for a framework methodology to emerge and 2020 for having a global standard in use.  Many focus on the complexity of Step 4 as an excuse for inaction, but methodologies exist and will be improved rapidly post Rio – and there is no credible reason for not starting with Step 1 immediately.

A further significant agreement to come out of Rio+20 was offered up on the 21st June, at the Avoided Deforestation Partners event organised by ADP founder Jeff Horowitz. Here, the influential Consumer Goods Forum representing 450 major companies announced a tie-up with the US Department of Agriculture to green their supply chains, and 50 of their signatories committed themselves specifically to become ‘deforestation free’ by 2020. The CEOs of Unilever and PUMA re-confirmed far reaching changes to their businesses, the former to halve the environmental footprint of the production and use of their products by 2020 and the latter in publishing its Environmental Profit and Loss Account, or ‘E-P&L’ (and being the first company to do so) in which it estimates in financial terms the company’s impacts and dependencies on natural capital in their operations and supply chains. Both have significant connections to rainforests, through the use of palm oil and rubber.

US$6 billion needed for Proactive Investment in Natural Capital (PINC) in Brazil:

At Rio+20, we also launched our ‘Think PINC’ report, funded by the UK Government, which charts the costs to Brazil of transitioning to become a sustainable agriculture superpower without compromising its status as a biodiversity superpower – through Proactive Investment in Natural Capital (PINC). PINC is a holistic framework to STOP deforestation at the frontier; INTENSIFY agricultural production on existing and degraded land; and RESTORE forests. We estimated the cost to achieve this for Brazil to be in the region of US$6.5 billion a year for 20 years. In 2010 alone, Brazil spent about US$40 billion on agricultural credits. Much of this can have perverse environmental consequences, while only 2-3 % of these credits – so-called agri-environment credits – are meant to stimulate environmentally friendly practices.  A small shift in this allocation of credits, accompanied by measures to encourage uptake of agri-environment credits among farmers (currently very low), is an obvious option. Innovative financial mechanisms (IFMs) that twin maintenance of forests and their ecosystem services with sustainable agricultural production could also have a huge impact.

So at Rio+20, several remarkable milestones have been achieved. For the first time, significant players from among governments, companies, and the financial sector, stood up on the same platform and said: yes, its time we took account of natural capital and we are committed to doing it now. Taken collectively, and if momentum is scaled up and copied by others, these approaches could lead to nothing less than a revolution in the global economy and one that will ultimately make it more resilient.  But it is not one that all are in favour of. Some NGOs and commentators see dangers in what they see as the ‘pricing and commodification of nature’ and, at the most extreme, want the private sector to play no part in protecting nature. The Natural Capital Declaration is not about pricing nature, it is about understanding risks and dependencies. The private sector is a huge part of the problem, and therefore it must form part of the solution – and greenwashers must be outed. I have personally witnessed how relying on existence value and efforts by governments alone seems manifestly to have failed nature and forest dependent communities in the last 40 years. I believe the risks of business as usual are greater than the risks of trying something new. That is why a fundamentally different approach, like PINC, is required.

What we need to do now:

Today’s price signals lead investors to convert natural capital for free with no thought for the consequences. The Natural Capital Declaration proves that many are realising this makes no sense and is a mis-valuation we can no longer afford to ignore. To expect this change to happen quickly is utopian. To succeed, the methodology to measure, value and incorporate risks and opportunities related to natural capital must be rapidly funded by national governments and businesses themselves. Credit rating agencies should revise how risky countries and companies really are that rapidly deplete non-renewable natural capital, compromising long-term security, for rapid financial gain. Global safeguards applicable to both the public and private sector need to be defined and eventually standards need to be adopted by the International Accounting Standards Board.  The International Integrated Reporting Council (IIRC) is convening to deliver an over-arching framework for company reporting. Paragraph 39 of the document agreed at Rio specifically mandates sustainability reporting and was one of the big wins at the Rio conference adopted by all governments present. Companies should adopt it too.

Twenty years from now, at Rio+40, I hope we will look back at 2012 as the moment when global momentum for accounting for nature really got under way. I feel proud that Natural Capital Declaration has helped light the blue touch paper for this to happen.

The GCP is grateful to CHK Charities for its generous support for the Natural Capital Declaration.